Today is the 26th World AIDS Day.  This morning I participated in a WAD ride sponsored by Positive Pedalers, an international cycling club that focuses on erasing stigma of HIV/AIDS by being a positive presence in that community (and to those outside that community).  The ride was followed by a ceremony at the National AIDS Memorial Grove in Golden Gate Park. 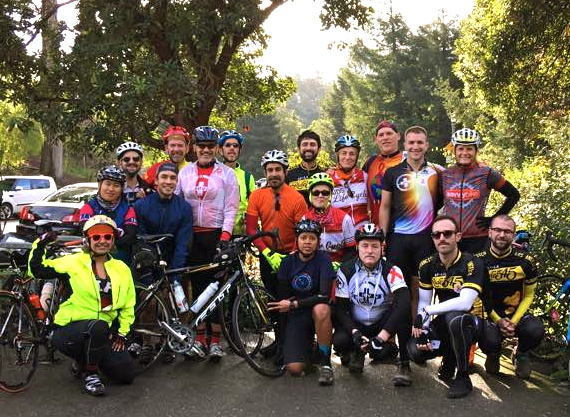 I was a young adult in the 1980s.  I worked in theatre during these years, a community especially hard hit in the early years of HIV and AIDS.  I distinctly remember my first friend who shared his positive HIV/AIDS status with me.  His name was Wayne, he bore a striking resemblance to David Bowie, and I had a terrible crush on him.  I haven’t thought about Wayne in many years.  As I feared, a quick google search yields no results.

Wayne and I worked together on a children’s theatre tour in the Washington, DC metro area.  For 10 months, the two of us, along with three other actors, toured schools 5 days a week.  We travelled together, performing at two schools each day, in a van packed tightly with costumes, sets, and sound equipment.  The five of us became very close.

One day, sitting in a Burger King on lunch break, Wayne told us he had tested positive.  I remember thinking it was a death sentence.  I cried openly.  So did everyone else.  I held him close.  I wondered, since we weren’t very educated about transmission in those early days, if I could contract HIV because I had shared sodas and cigarettes with him.  But mostly, I was devastated.  I mourned, because he was symptomatic and I knew he would die.

Over the years, I’ve had countless friends and colleagues who were HIV positive.  I’ve known countless others who have died of AIDS.  It’s been a part of my entire adult life.

More than a decade later, in 1998, I moved to the San Francisco area.  Wanting to find a volunteer opportunity, I registered to participate in the California AIDS Ride, a 7-day, 600-mile bicycle ride that raised funds and awareness for the San Francisco AIDS Foundation.  When I registered, I did so because I wanted to improve my health and I wanted to feel a part of my community.  But, like many participants, as I trained and then completed the ride, it became more about HIV/AIDS than about me and my goals.  And what I learned through that experience was that there were many folks who lived with HIV and AIDS and also rode their bicycles in that event.  AIDS was no longer a death sentence.

There’s a prevailing feeling, especially among our youth, that AIDS is not dangerous.  It won’t kill you.  It’s a thing of the past.  There are drugs to treat it.  And that’s the demographic that’s seeing an increased diagnosis of HIV and AIDS.

So, today, I ask you to think about AIDS.  Remember that we’re still fighting this disease.  And, if you have the opportunity to influence a young person about the risks and prevention, please don’t hesitate to take action.