This Just Got Real!

I’ve done some incredibly crazy things in my riding career.  Some really impulsive things.  Some things that, if a coaching client asked my opinion, I’d say “no way, Jose!”  Like what, you ask?  How about riding from San Francisco to Los Angeles in the California AIDS Ride when I hadn’t been on a bicycle in decades.  Or the time I agreed to race a 24-hour mountain bike race even though I could barely ride a mountain bike (and had never ridden one at night).  Or building up a touring bike and riding solo self-supported around New York for 3 weeks.  Or attempting the Death Ride when all I’d been doing that season was road racing (and no long endurance).  Yup, these might all be considered crazy…..or stupid.  And sometimes the result is less than magical.  Once in a while it’s amazing.  Let’s hope the latter is true for my next challenge.

Less than a week ago, one of my cycling friends from my hometown of Elmira, NY, contacted me about an opportunity to join the record-holding two-tandem relay team at this year’s Furnace Creek 508 on October 5th – 6th.  My initial reaction was that I would be happy to help him find someone to fill the team.  Both the riding and funding to participate in this event were beyond my grasp right now.  But somehow, over the course of a few hours during our discussions on Facebook, I agreed to do it, assuming I could find personal sponsorship to cover the expense.

So, I contacted my personal angels, folks who have supported me in my crazy dreams for many years, and thanks to the generosity Gary Brustin and Jan Medina, I funded this latest endeavor.   Now I had no excuse not to participate. 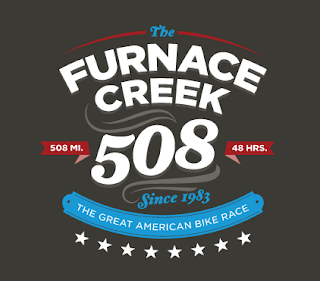 So, let me tell you what’s crazy about this event.  It’s called the Furnace Creek 508 (as in 508 miles).  The route begins in Santa Clarita, CA and ends in Twentynine Palms, CA, via Mojave, Death Valley, Stovepipe Wells, Furnace Creek, Badwater, and a bunch of other similarly significant-sounding desert towns.  It’s one of the premier ultra-cycling events in the world.  I’ve known many folks who’ve done it in the past and they’re all serious endurance bad-asses.  I see the crazy rides they do and think “why would you want to ride a bike for 20 or 30 or 40 hours at a time in the dark and the extreme heat and the rain?”  Luckily, as part of a relay team, I’ll only be riding 230 miles with 17,000′ of climbing.  Since I completed the Death Ride in July (125 miles with 15,000′ of climbing), I could see that the mileage and elevation were within reach……if I’d actually kept my endurance up the past 6 weeks.  And, since it’s a relay, there are breaks when the other team is riding.  So really, it’s only 4 segments of an average of 65 or so miles, right?  I can ride 4 65-mile rides over the course of a day and a half.  No problem!

But, to add to the fun, I’ll be riding this event on the back of a tandem.  With a man I’ve never met.  Maybe he won’t notice if I’m not actually pedaling?  Yup.  A tandem.  Now, I’ve tandemed exactly twice in my cycling career:  once in 2002 with a man I’d gone on one date with (and decided there would not be another date after that experience) and once in 2006 with a man who was riding a tandem solo from Prudhoe Bay, Alaska to the Panama Canal.  The latter filmed his adventure which was later featured at the Banff Film Festival, so I got to see myself on the big screen.  But that’s not exactly the resume of someone who’s ready to undertake a serious (or seriously crazy) endurance event as stoker of a tandem.

So, all the stars aligned and I just got an email welcoming me to the team.  And it all makes sense now.  I’ve got my work cut out for me in the next month, but I’m in good hands.  My tandem partner is the legendary Jim Ryan of Seattle.  He’s a 9-time Furnace Creek 508 finisher (solo, 4-man, and 2 tandem).  He’s a FC508 Hall of Fame member.  He’s a FC508 record holder.  He’s ridden other crazy endurance events like Race Across the West (RAW).  And he seems like a really nice guy.  In last year’s race, he met his tandem partner for the first time the day before the race and they survived.  Heck, they set the record for their division.  Joining us on the other tandem are Paul Kingsbury (owner of Kingsbury’s Cyclery in Elmira, NY) and his fiance Wanda Tocci.  They were the other tandem on last year’s record-winning team.  I’ve ridden with Paul once before (not on a tandem) and he assures me we’ll have a great time.  Joining us will be our support crew, also veterans of the event.  What could go wrong, right?

So, for the next month, I’ll be logging the big miles.  I’ll be climbing the long climbs.  I may even meet up with Jim in Oregon for a training weekend.  And I’ll make sure to update this blog with training updates as I prepare for what might be the craziest, most impulsive event I’ve ever ridden!