I’m not sure why I was so affected by yesterday’s ride.  I crashed a week ago (only my 2nd road cycling crash in 14 years, hit by another cyclist).  My only other crash was in 2002 when I was hit by a car.  I was very fortunate and my injuries were very minor (soft tissue damage) but it meant that I have only been on the bike twice now since the crash.  The first time on the bike, I felt fine mentally, except a bit of nervous energy when I returned to the site of the crash.  But yesterday, I was nervous even before rolling out the door.  I think the death, on Wednesday, of a woman about my age, riding on a road I’ve ridden at least a few hundred times, due to a collision with a motor vehicle, left me feeling a bit uncertain about my own safety.

I’m a super-defensive rider.  I like to believe I see and anticipate every potential risk.  I don’t ride on roads that I perceive as dangerous.  I’m extra cautious when riding during twilight hours (because vision is limited).  I learned great tips for “thinking like a car” from Velo Girls sponsor Gary Brustin (BicycleLawyer.com).  I teach participants in our skills clinics that YOU DON’T HAVE TO CRASH YOUR BIKE.  I believe that.  I’ve had close calls with automobiles pretty much every ride I’ve ever done, and yet I’ve kept it upright.  But suddenly, yesterday, I was very nervous.

Not a quarter mile from my house, a woman almost hit me while she was talking on the phone.  Two miles later, a man in a big white truck with jacked up wheels and NRA stickers all over the cab, intentionally tried to spook me by swerving into me.  When I rolled up to the red light, stopped next to him, he turned and laughed at me, then floored it and sped off.  As I started my first climb, I realized that the cars felt faster, closer, and more distracted than usual.  I kept asking myself “why do these cars need to drive so darn fast?”  I almost turned around at that point.  I just had a nervous feeling about being out on the bike yesterday.  And that’s when I cried.

I decided that the worst thing I could do would be to call my ride short.  I needed to keep pedaling, to regain some confidence, to calm my nerves.  I made route decisions based on my mental state, avoiding certain roads that I knew would be busy on a Sunday afternoon.  I found myself being a bit more conservative than usual, controlling my speed a bit on my descents and being hyper-aware of blind turns.  I noticed a larger-than-usual number of bicycles with both front and back blinky lights (thanks in some part, I’m sure, to a fabulous blog post earlier this week by Mike Jacoubowsky of Chain Reaction Bicycles).

And then, I chose a small climb I haven’t ridden in many years.  It’s a bit off the beaten path and I thought that would be good for me.  As I settled into my climbing rhythm, I felt a calm settle over me.  The road was deserted and lovely.  As I peaked, I had the most gorgeous view of the San Francisco Bay, Mt. Diablo (recently ravaged by wildfire) and Mt. Hamilton.  I regret not taking a photo, because the late afternoon light created the perfect contrast and depth on the bay and the east bay hills.

The rest of my ride, drivers seemed to slow down.  They seemed more considerate.  They waited to pass until it was safe to do so.  They gave me more room when passing.  Not a single car buzzed my elbow.  I received a few friendly waves and a smile or two.  And I started to realize that the number of automobile drivers who respect cyclists and want to share the road with us far outweighs the number of automobile drivers who might harm us (whether intentionally or unintentionally).

And I finished my ride the way I always finish my ride with a victory salute as I rolled down my street, celebrating the fact that I made it home alive.  Yup, I’m always aware of the risk.  We should ALL be aware of the risk of riding a bike.  But I think, too often, we forget.  Or we hide our emotion as a coping mechanism, allowing us to continue participating in an activity that really is dangerous.  We forget, until someone is injured or killed and we can’t forget anymore. 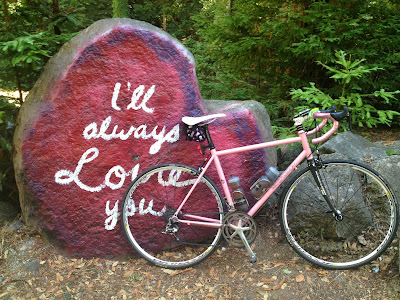