many years ago, when I first became a cycling coach, one of my clients shared this little nugget of psychological wisdom. she wasn’t referring to cycling, but I found it an important lesson for just about anything in life. I immediately stole it and began using it as the preface to my skills clinics. it’s simple yet brilliant.

I know you’re on the edge of your seat waiting to learn what this piece of advice might be. of course, if you’ve participated in one of my clinics, you know exactly what I’m about to type.

whether you’re learning to ride a bicycle or race a bicycle, mountain bike, or even ride a unicycle, it’s okay to be a beginner.

something happens to us in adulthood that creates a mental challenge for us to learn something new. we’ve become successful. we have college degrees, jobs, and healthy relationships. we know how to balance a checkbook and do laundry. we can multi-task. we find it difficult to ask for help. and suddenly, it’s not okay (at least in our own minds) to not be perfect at something. we put a lot of pressure on ourselves to succeed. and when we don’t find immediate success, we’re embarrassed and frustrated and (all too often), we give up before we’ve really given ourselves a chance at success.

I always chuckle when someone says “it’s just like riding a bicycle.” if that were true, I wouldn’t have been able to build a successful business that focuses on teaching adults how to ride and race their bicycles.

although most of us rode a bike as a child, many of us stop riding for a period of time (usually our 20s) while we’re living life in other ways: college, career, family, etc. and then, when we decide it’s time to ride a bike again, we’re faced with seemingly insurmountable challenges. something has changed since childhood. we have fear. we understand pain + mortality. we have a job to go to on Monday. we’ve forgotten that riding a bike should be fun. we worry about what others will think of us. we feel judged. we’ve forgotten what our body feels like and how to interact with a bicycle.

so instead, we try to manage the bicycle. we try to fix it and control it and conquer it. and because we don’t understand how a bicycle really works and we no longer listen to our body in quite the same way we did as a child, we fail. we crash. we’re afraid. and we’re frustrated.

I experienced this myself. I rode a bicycle from tricycle to 10-speed Free Spirit through my early 20s. it was my transportation. it was my freedom. I rode to the playground. I rode to school. I rode to my boyfriend’s house. I rode to parties. I rode to my job. I rode everywhere. and then…..I stopped riding.

but those of you who know me well know that I’m stubborn. I really, really wanted to ride my bike. I was obsessed with riding my bike. I registered to ride in the California AIDS Ride, a 7-day ride of almost 600 miles from San Francisco to Los Angeles. I had nine months to train. it seemed impossible. I would conquer it. and I did. within three months, I had ridden my Hard Rock almost every day. I completed my first century on the Coyote Creek Trail (solo), riding back + forth + back + forth. I eventually conquered my fear of riding on the road and ventured away from the bike trails. and then I started riding with groups. before I knew it, I was commuting in the dark from San Mateo to San Francisco. and then I was leading rides for Team Schwab and for the California AIDS Ride. but I still wasn’t a perfect rider and that frustrated me.

when I was given the opportunity to change careers in 2001 by Charles Schwab, I decided that I wanted to share the amazing physical, mental, and personal transformation that I’d undergone by riding a bicycle with others. so I became a coach and a personal trainer and founded Velo Girls, one of the first women’s-only cycling organizations in the United States. and then I began the process of deconstructing the physics of riding a bike so I could teach others in a way that was logical and progressive. I wanted to break down those barriers that kept adults from riding, kept them from succeeding, and kept them from having fun. I wanted to help adults understand how to ride with their bicycle (not on their bicycle). I developed a series of skills clinics that I tested out on our very first racing team. those clinics were the foundation of Girls Got Skills, our racing development program, and our four-hour Bike Skills clinics.

and the rest is history.

so, if you’re frustrated or afraid or embarrassed, you’re not alone. I was there and hundreds of adults with whom I work each year were there, too. it gets better. but the first step in learning is to give yourself permission to be a beginner and be patient with the learning process. if you do, you’ll open up a world of possibilities for yourself. 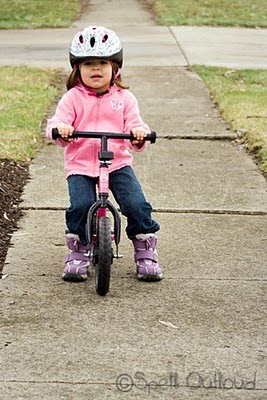